If you got here, the chances are you heard the fuss around Docker and how it’s supposed to change the way we deploy applications.

…a platform for developers and sysadmins to develop, ship, and run applications. Docker lets you quickly assemble applications from components and eliminates the friction that can come when shipping code. Docker lets you get your code tested and deployed into production as fast as possible.

I’m not here to sell you anything; apparently there are too many people doing that already. Instead, I’m going to document my experiences trying to “Dockerize” a simple Rails application and show you some things I learned along the way.

I few months ago I built TeXBin, a simple Rails application where you can post a .tex file and get a URL for its PDF version. The code was sitting in my laptop without being used, so why not use it as guinea pig in my first attempt to use Docker? :-)

The proposed stack is composed by three components: the application itself, a MongoDB instance, and a Nginx server to both serve the static content and act as a reverse proxy to the application.

WTF is a container?

Docker is built on top of Linux kernel facilities, like cgroups and namespaces, and provides a way to create lightweight workspaces – or containers – that run processes in isolation.

By using containers, resources can be isolated, services restricted, and processes provisioned to have a private view of the operating system with their own process ID space, file system structure, and network interfaces. Multiple containers can share the same kernel, but each container can be constrained to only use a defined amount of resources such as CPU, memory and I/O.

So, in short, you get nearly all the benefits of virtualization with barely none of the execution overhead that comes with it.

Why not put everything within the same container?

You get several benefits by exposing the different components of your application as different containers. Just to be clear, by component I mean some service that binds to a TCP port.

In particular, having different containers for different components gives us freedom to move the pieces around or add new pieces as we see fit, like:

In other words: it’s a good idea to keep the moving parts, well, moving.

Containers are created from images, so first we need to create an image with the application code and all the required software packages.

Instead of doing things manually, Docker can build images automatically by reading the instructions from a Dockerfile, which is a text file that contains all the commands you would normally execute manually in order to build a Docker image.

This is the application’s Dockerfile:

Information about the individual commands can be obtained here.

Why do you need RVM if the application will live inside a controlled and isolated environment?

The only reason you might want to do that is because you need to install a particular version of Ruby that you can’t find via traditional OS package managers. If that’s the case, you’ll be better off installing the Ruby version you want from the source code.

Using RVM from within a Docker container is not a pleasant experience; every command must run inside a login shell session and you’ll have problems using CMD together with ENTRYPOINT.

Docker stores intermediate images after successfully executing each command in the Dockerfile. This is a great feature; if any step fails along the way, you can fix the problem and the next build will reuse the cache built up until that last successful command.

Instructions like ADD are not cache friendly though. That’s why it’s a good practice to only ADD stuff as late as possible in the Dockerfile since any changes in the files – or their metadata – will invalidate the build cache for all subsequent instructions.

Which leads us to…

A really important step is to avoid ADDing irrelevant files to the container, like README, fig.yml, .git/, logs/, tmp/, and others.

If you are familiar with .gitignore, the idea is the same: just create a .dockerignore file and put there the patterns you want to ignore. This wil help keep the image small and the build fast by decreasing the chance of cache busting.

To run the application, first we’ll need a container that exposes a single MongoDB server:

Then you have to build the application image and start a new container:

Learning how container linking and volumes work is essential if you want to understand how to “plug” containers together.

Note: The project also includes a Dockerfile for the Nginx container which I won’t show here because it doesn’t bring anything new to the table.

Now docker ps should display two running containers. If everything’s working, you should be able to access the application at http://localhost:3000. To see the logs, run docker logs texbin_app_1. 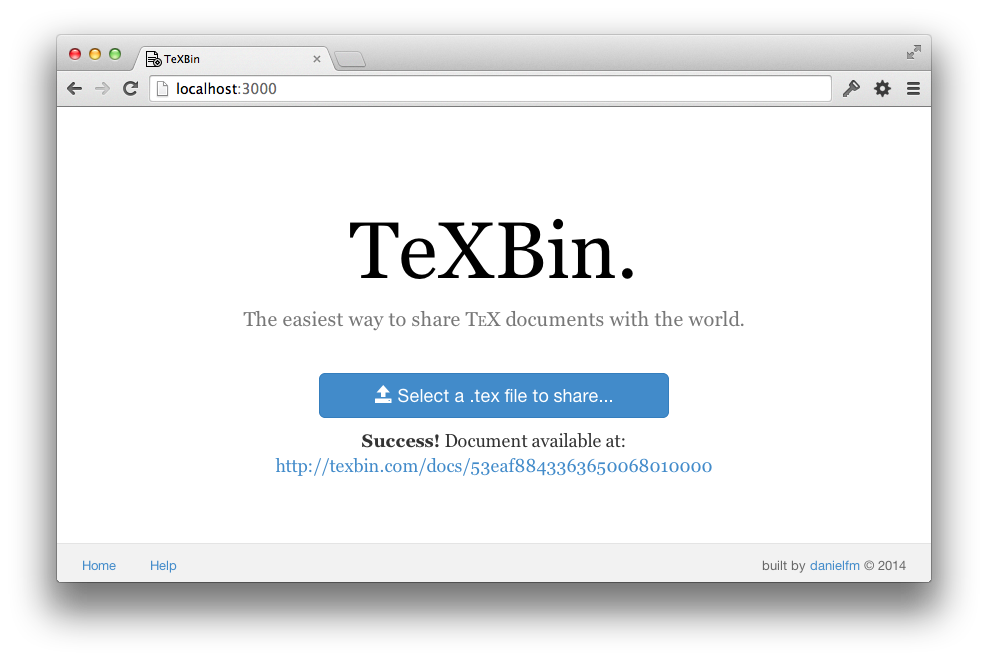 It turns out it’s quite easy to automate these last steps with Fig:

Then, run fig up in the terminal in order to build the images, start the containers, and link them.

The only difference between this and the commands we ran manually before is that now we’re mounting the hosts’s current directory to container’s /texbin/app so that we can view our changes to the application in real time.

Try changing some .html.erb template and refreshing the browser.

The goal is to run the same application in production, but with a different configuration, right? A simple way to – sort of – solve this is by creating another image, based on the previous one, that changes the required configuration:

If you know a better way to do this, please let me know in the comments.

The first thing to do is to push your images to the server. There are plenty of ways to do that: the public registry, a private-hosted registry, git, etc. Once the images are built, just repeat the procedure we did earlier and you’re done.

But that’s not everything. As you probably know, deploying an application involves a lot more than just moving stuff to some remote servers. This means you’ll still have to worry with things like deployment automation, monitoring (at host and container levels), logging, data migrations and backup, etc.

I’m glad I took the time to look at Docker. Despite its young age, it’s a very impressive rapidly-evolving piece of technology with a lot of potential to radically change the DevOps landscape in the next couple of years.

However, Docker solves only one variable of a huge equation. You’ll still have to take care of boring things like monitoring, and I imagine it’s rather difficult – not to say impossible – to use Docker in production without some layer of automation on top of it.